Start a Wiki
watch 01:50
The Loop (TV)
Do you like this video?
Wildemount[1] is an Exandrian continent located to the northeast of Tal'Dorei.

The second campaign of Critical Role takes place on this continent. The Briarwoods originated from Wildemount before seizing Whitestone.[2] Taryon Darrington and his family were also residents of Wildemount.[3]

The Shearing Channel is the ancient divide between the continents of Tal'Dorei and Wildemount. A former land bridge was destroyed by the Calamity, leaving nothing but jagged rock and winding rapids that is nearly impossible to cross. It is said that great monstrosities live beneath the ancient waves and devour any who seek to cross.[4] 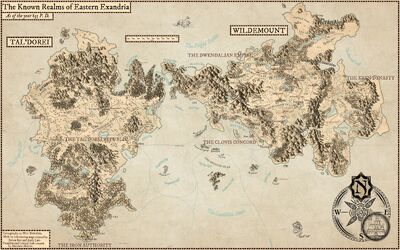 Eiselcross is a large body of land to the north of the main Wildemount continent. It is separated from the mainland by The Frozen Depths- a large channel of water. Other than two small ice fishing villages that are considered part of the Dwendalian Empire, it is uninhabited. Dangerous beasts live outside of the villages so people do not go there.[5]

The Menagerie Coast is a collection of city-states on the southwestern coast of Wildemount and the Swavain Islands, bound to mutual self-defense and trade with each other through the Clovis Concord.[6]

To the north and east of the Menagerie Coast and across the Cyrios Mountains lies Wynandir. This region is bisected by the Ashkeeper Peaks into eastern and western portions. In Eastern Wynandir lies the empire of Xhorhas, while Western Wynandir is ruled by the Dwendalian Empire.[7]

The Dwendalian Empire is a nation on the continent of Wildemount[8], dominating the western half of the region of Wynandir.

Xhorhas lies in the expansive wastes and turbulent badlands of eastern Wynandir. The dynasty is largely centered in the northern lands surrounding the ruins of Ghor Dranas, now the city of Rosohna. Known as the Kryn Dynasty, it is ruled by the Empress Leylas Kryn, the Bright Queen.[9]

Draconia was a floating archipelago of cities on the continent of Wildemount,[10][11] southeast of the Ashkeeper Peaks.[12] It was a dragonborn kingdom and the home of Tiberius Stormwind.

The Greying Wildlands lies north of Xhorhas and the Dwendalian Empire in Wildemount. It is a lawless realm harboring a curse that has kept it unconquered by human hands.[13]

The climate in the central part of the Dwendalian Empire is similar to that of the real world's Central Europe and Western Russia. Farther south in Wildemount is warmer.[15]

Of the tieflings that originate from the same area (as opposed to being scattered throughout non-Tiefling populations), many come from Wildemount.[16]

There is an ongoing war between the Dwendalian Empire and Xhorhas, which started with a number of cross-border attacks.[17]

War Between Xhorhas and the Dwendalian Empire Edit

With news reaching Zadash that the advancing armies of the Kryn Empire had broken through The Ashguard Garrison at the Brokenveil Bluffs[18], the threat of the looming dark skies that accompanies their armies grew. These dark clouds that hung over the Kryn lands to the east of the Ashkeeper Peaks had begun spreading from the east, and if left unchecked threatened to blot out the sun from rising over the Dwendalian Empire.[19]

Art:
Retrieved from "https://criticalrole.fandom.com/wiki/Wildemount?oldid=85736"
Community content is available under CC-BY-SA unless otherwise noted.