Blew up his own workshop during the Battle of Vasselheim

Victor was a vendor of mining products (and byproducts) in Vasselheim, and he served as Percy's source of black powder in Othanzia. As an NPC, Victor was played by Matthew Mercer.

Victor was described as a lithe, crooked-looking man, who was quite elderly but very spry for his age. His arms and legs were quite spider-like and lanky. He had frazzled, grey hair, a puffed out, partially burnt and curled bit of goatee, and wore spectacles of two different lens sizes, at least for his work. One of his glasses was cracked and he was half-covered in soot.[5][6] Supplied with a variety of refuse from mining operations (such as gravel, sulfur, and quartz), he utilized them in the creation of black powder (presumably sulfur, charcoal, and saltpeter).

Erratic and eccentric, Victor was considered to be a "crazy old coot" by his friend and supplier, Samson.[7]

Before leaving Vasselheim, Percy decided to look for supplies to make ammunition. He asked around in the Braving Grounds and was directed to Victor's hovel. Victor became very excited when Percy said he was looking for black powder and sold him one hogshead worth of the material.

The second time Percy visited Victor, Victor was missing several fingers due to an accident that also destroyed part of his roof.[8] He told Percy that he has not been his only customer; he was also patronized by a nicely-dressed woman, possibly Anna Ripley.[9] He then sold four vials of black powder to Percy and promised to keep quiet if Ripley came around again to buy more powder.

When Percy next saw him, Victor was missing all of the fingers on his right hand, for which Percy designed a prosthetic with two attachments.

Victor died in Vecna’s siege on Vasselheim. During the battle, he rigged his shop with explosive powder and lured in a group of necromancers and undead before blowing them, his shop and himself up. Vox Machina heard this large explosion from the top of the Titan, although to them at the time it was just another part of the battle far below.[4]

Percy buys black powder from Victor and maintains a friendly relationship with him. Victor's eccentricity makes Percy uncomfortable but for the most part they maintain an amicable relationship. 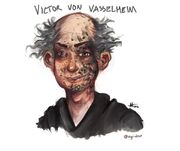 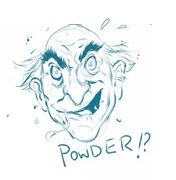 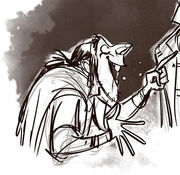 Art:
Retrieved from "https://criticalrole.fandom.com/wiki/Victor?oldid=99744"
Community content is available under CC-BY-SA unless otherwise noted.