→This page is about the tabletop game. For the character, see Uk'otoa.

12+[1]
Uk'otoa is a tactical semi-cooperative card game developed by Darrington Press LLC and designed by Jeb Havens and Gabriel Hicks. In the game, players control factions of sailors on the Lucidian Ocean who fight for survival against the leviathan of the same name. It is scheduled for release May 27, 2021.[2]

“
A battle for life and death on the high Lucidian seas! This flagship title from Darrington Press is a tactical game of semi-cooperative card play as factions of sailors vie to be the last claimed by the raging sea leviathan Uk'otoa. As the ship slowly falls into the ocean, you'll have to run, push, and sacrifice others to win! Fans of Critical Role know Uk'otoa as the ex-patron of warlock Fjord (played by Travis Willingham). Who could say whether these tales hold any truth? Fjord isn't telling.

Hexes are placed on the board to represent the wreckage of a destroyed ship and are progressively removed as they are consumed by Uk'otoa. Players control two factions, which they share with their neighboring players, and use cards to best position their two teams to survive. Each card carries immersive art and icons depicting the movement it provides.[3]

A sea shanty is included in the rulebook of Uk'otoa. On May 12 2021, an animated music video showing off the original song was released to promote the release of the game. The song was written by Taliesin Jaffe and Dani Carr, and performed by Ashley Johnson, Sam Riegel, Taliesin Jaffe and Steve Failows. It featured art by Hannah Friederichs. 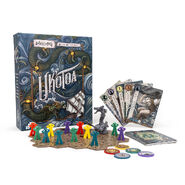 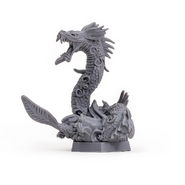 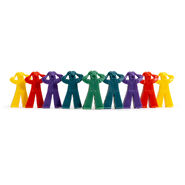 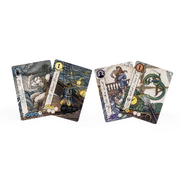 Retrieved from "https://criticalrole.fandom.com/wiki/Uk%27otoa_(game)?oldid=122710"
Community content is available under CC-BY-SA unless otherwise noted.