The World of Critical Role: The History Behind the Epic Fantasy

The book details the real-world history of Exandria and the series and features new art of and behind-the-scenes insight into various moments in both campaigns.[2] The book is also available as an audiobook of the same title.[5]

The book was available for preorder from January 30, 2020, to March 12, 2020. Customers who preordered the book within the aforementioned timeframe had their name printed in the book.[2] In The New York Times Best Seller list for November 8, 2020, the book was #9 in "Advice, How-To & Miscellaneous".[6]

Dive deep into the history of the world's most popular fantasy RPG livestream with the cast of Critical Role in this definitive guide featuring never-before-seen illustrations and photos.

From its unassuming beginnings as a casual home game between friends to the role-playing phenomenon it is today, Critical Role has become the stuff of legend. These pages chronicle how a circle of friends who all happen to be talented voice actors built the most-watched tabletop role-playing livestream of all time.

Discover dazzling new illustrations and richly written insights into the locations, characters, and adventures featured in the hundreds of episodes across Critical Role's two campaigns, Vox Machina and the Mighty Nein. Go behind the scenes with archival photos and exclusive interviews with Dungeon Master Matt Mercer and the entire Critical Role cast as they explore their characters' most triumphant moments and darkest hours. And celebrate the massive community of Critters who support and expand the show's world through a highlighted tour of the crafts, cosplay, and art they create every day.

Featuring a foreword from the cast, lush illustrations, and the inside story you won't find anywhere else, this book is your indispensable guide to Critical Role. The adventure begins![1]

The book takes a behind-the-scenes look at how the Critical Role franchise, describing how it came together, how it runs today, and what the future holds for the show. The book features new interviews from the cast members, who offer new perspectives on moments from both campaigns. It includes illustrations of locations, characters, and events from the history of the group and highlight the Critter community.[7]

Each of the chapters in The World of Critical Role is named after a lyric from "Your Turn to Roll", the theme song of The Legend of Vox Machina.

“
Hopefully, you will be inspired by the group's enthusiasm, hard work, and dedication to each other. They are truly genuine, lovely people. By the end of reading these pages, anyone will be proud to call themselves a Critter. I know I am.
”
–
Felicia Day
[edit]

A single-page foreword by Felicia Day in which she describes her involvement in the launch of Critical Role, what the show embodies, and what readers will see in the book.

“
From the first minute of the first stream, you see exactly what Matt and the rest of the group insisted on: No special effects. No edits. Nothing to interrupt the role-play. Just a bunch of nerdy-ass voice actors, sitting around and playing Dungeons & Dragons. Critical Role had begun.
”
–
Liz Marsham
[edit]

Chapter 1: The adventure begins, they were always beside you... introduces readers to Dungeons & Dragons and Critical Role, details the history of the home game and the early history of the streamed game, and features cast commentary on the live-action episode openings.

“
These eight friends, these eight performs, make magic every week. It's worth looking at them separately to understand why, and how. Here's a little about their lives, what they each bring from their lives to the game, and how all those different pieces come together, complementing and contrasting and aligning just right, to make one, perfect picture.
”
–
Liz Marsham
[edit]

Chapter 2: Your nerdy best friends, and the DM to guide you... features one-on-one biographies and excerpts of commentary from the cast of Critical Role on themselves, their backgrounds, their careers, their time playing D&D, and their characters.

“
Adventuring in the vast, complex world of Exandria is no easy matter, and both Vox Machina and the Mighty Nein have needed plenty of help along the way. Most of that help, of course, is actually Matt, playing one of the hundreds of characters he has created. But sometimes it's fun to shake things up, and that's where guests come in.
”
–
Liz Marsham
[edit]

Chapter 3: And they rise from the flames for the battles ahead. Villains beware 'cause you're 'bout to be dead! describes the setting of Critical Role and focuses on the guests and their characters and the various non-player characters, allies and antagonists alike, that have appeared on the show, including the cast's most frustrating enemy: doors.

“
You pick your stats and you write your backstory before the game starts, sure. But once you take your character out into the world, anything could happen. Maybe they'll find a new weapon that changes the way they want to fight. Maybe they'll gain a new ability that changes their persoanlity, making them more confident, or sneakier, or more insightful. Each item your character finds, each spell they choose, each skill they master continues to add to their story. Here are some ways that the cast has taken their character's battle tools and made them into role-playing tools as well.
”
–
Liz Marsham
[edit]

Chapter 4: They got magic and flair. They got falchions and cunning. focuses on the items, spells, and abilities at the disposal of the players and characters and spotlights the most notable used by each character.

“
After doing that a number of times, the phrase 'How do you want to do this?' became the shorthand for the invitation at the table, and my players began to know what that meant. And then it became a phrase that they waited for, what they got excited for. It became kind of a cheer at the table for a player success, and that's what it is now, to this day.
”
–
Matthew Mercer on his famous phrase.
[edit]

Chapter 5: They don't see over there, there's a monster incoming! explores the various aspects of the combat side of D&D, including how Matthew Mercer creates the maps and minis used in combat, the different ways combat and encounters can go for better or worse, and the different ways monsters are killed.

“
During the live Q&A after episode 10, the topic came up? The cast threw the question to the Twitch chat, and an answer came back: Critters. The name stuck immediately. Cute image, nice pun, what's not to like, right?
”
–
Liz Marsham
[edit]

Chapter 6: Inspiration is waiting, rise up, don't think twice... focuses on the Critical Role community and how they "inspire" the cast through fan art, crafts and cosplay, gifts and donations, and online projects like CritRoleStats and the Critical Role Wiki.

“
There's something so freeing about being able to follow your imagination anythere you want to. There's nothing fencing you in for what the story is. There's no 'I can only do X, Y, an Z moves.' Anything can happen.
”
–
Liam O'Brien.
[edit]

Chapter 7: Put your fate in your hands, take a chance, roll the dice! focuses on the players' ability to try anything, notable moments in both campaigns involving player creativity and crucial dice rolls, and why the cast enjoys D&D and what they bring away from the table.

“
We want to have a positive impact on the world and we felt lucky to have this growing Critter community of people who are moved by the story. And that is the biggest gift to us, to have people follow along, and we wanted to pay it forward. So we started immediately looking for ways to leave a positive impact in addition to getting to tell this fantastic story.
”
–
Liam O'Brien.
[edit]

Chapter 8: Can you answer the call? Dig in deep in your soul... focuses on the activities of the cast outside of the main series: charity involvement, special episodes, other cast members taking on the role of Dungeon Master, Brian Foster and Talks Machina, and other creative ventures.

“
I think there's always going to be people finding ways to add bells and whistles and unique ways to enhance the gameplay experience, but I don't think anything will ever replace what makes this wonderful, which is the very, very basic elements of getting together with people you like, rolling some dice, and telling a story together.
”
–
Matthew Mercer
[edit]

Chapter 9: As the legend unfolds... discusses the future and impact of Critical Role and tabletop role-playing games and what the cast wants for the legacies and lessons they will leave for their audience and children.

Now it's your turn to roll![edit | edit source]

“
More specifically, the Critters mentioned in chapter six are all excellent follows and a good way to dip your toe into the fan community. Follow them, check out the hashtag and follow some more, and soon your feeds will be chock full of talent, inspiration, and positivity.
”
–
Liz Marsham
[edit]

Now it's your turn to roll! lists where readers can find more online communities and resources for watching the show, playing D&D, participating in the community, submitting fan art, and donating to charity.

About the Author[edit | edit source]

“
As a D&D character, she would most likely be a warlock: she can do a couple of cool things in a row, but then she needs a nap.
”
–
About the Author.
[edit]

This section provides a brief backstory for Liz Marsham, the author of the book, and what kind of D&D character she would be.

“
Liz would like to thank everyone at the Critical Role Wiki, CritRoleStats, and the Critical Role Transcript project. Without you, this book would be far less fun to read, and it would have been dramatically more difficult to write.
”
–
Special Thanks.
[edit]

In this section, Marsham thanks a few online fan projects for greatly easing the writing of the book and making it more fun to read. 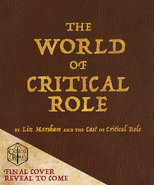 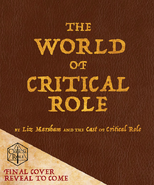 Retrieved from "https://criticalrole.fandom.com/wiki/The_World_of_Critical_Role:_The_History_Behind_the_Epic_Fantasy?oldid=116802"
Community content is available under CC-BY-SA unless otherwise noted.