watch 03:27
Wiki Targeted (Entertainment)
Do you like this video?
Play Sound

The Subterranean Tunnels of The Labenda Swamp is a network of underwater passages with occasional air pockets that are used by the Merrow in the Labenda Swamp.

Inside of the gentleman’s safe house is a hole leading to the tunnels. The hole has chunks of rock, dirt, an interwoven network of roots coming down from the tree and swamp water running down the tunnel.[1] It is about three feet wide in most places and there are claw marks where it has been dug out.[2]

This chamber is kidney shaped.[3] It has a ten-foot high ceiling and natural gravel and sand floor.[4] There are a few outcropping walls[5] and in the center is a small pool. The pool has brackish and thick water with four discarded humanoid skeletons at the bottom.[6] On the other side of the kidney there is a ten square foot side pool that hides a tunnel that connects the first and the second chambers.

The entrance of the tunnel is 5 by 10 feet and is used to travel between the chambers. The tunnel is 15 feet high with a layer of sediment on the bottom.[7] The tunnel curves below before evening out and going for about 30-40 feet before opening up into a 20-foot pool in the second chamber.[8]

This chamber is mostly built out of natural rock with edges of stacked stones looking like it once was masonry architecture that has been partially reclaimed by the ages. In the center where stalactites and stalagmites met are two large central pillars creating a structure. A large portion of the floor is submerged in water, and there are different paths and avenues curving off and vanishing. Leading upward is a weird set of natural stairs[9]
The Platform On the platform is an oblong rock formation, boxes, crates, and piles of things gathered around it. The oblong rock formation is about six to ten feet wide at different places. It has a pool of water with mist rising and sifting from it, which is loosely drifting off from the surface of the water. There is enough space around the edges of rock for a lot of objects.[10]

Beside the small entrance pool there are small mounds of various minerals that has long dripped from the ceiling from condensation and various water flows that have come through this interior cavern and built a hard, rocky platform that emerged just outside of where the pool ends.[11]

After finding the safehouse of the Gentleman the Mighty Nein and Calianna went down the tunnel below, where the party found strange, twisted-looking merfolk (called "merrow") that seemed to have been living in this partially-submerged tunnel system, beneath the swamp. They engaged in battle, killed a number of them. When they sifted through the remnants, of what was dragged out of the safehouse, laying on the ground beside the pool. They found and looted:

Here they discovered that Cali's quarry was the bowl that could speak to the Scaled Tyrant (Tiamat). The bowl was sundered to pieces using Yasha’s Magician's Judge. Cali decided to leave through the tunnel, with her quest complete.

After Cali left, Fjord made a brief swimming excursion into one of the far-off tunnels, finding that it led to a second chamber and seemingly a base of operations where more of the merrow lived and more remnants of what was taken from the safehouse. 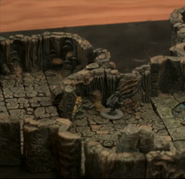 Add a photo to this gallery

On the suggestion of Fjord, the Mighty Nein all rested up before going down further into the caves. The group decided to follow Fjord through with Nott staying behind. On the other side of the tunnel, they engaged more merrows, and found a strange altar room where they had gathered everything they had stolen from the safe house. They slaughtered the Shallow Priest and his protectors. In this chamber they found:

In the oblong rock formation at the bottom lay a smooth polished stone that looked like a cat's eye. It had a yellowish color to it and striations that refracted light around it. At one end was a pointed oval line carved in about three inches across.[28]

The party found 100 to 120 of metallic objects around the oblong rock formation, symbols of deities that are outlawed by the Empire. They were of different shapes, configurations, and designs. A number of them were scattered about, some in disrepair, with actual pieces of dried barley and other grains around it. There were symbols and worship idols from:[29]

The party took what was necessary and what was of interest from that pile and made their way back out, closed the pathway the merrow had to the safe house, and completed the Gentleman's job.

Add a photo to this gallery

Retrieved from "https://criticalrole.fandom.com/wiki/Subterranean_Tunnels_of_the_Labenda_Swamp?oldid=83455"
Community content is available under CC-BY-SA unless otherwise noted.