Robbie Daymond played Dorian Storm in all eight initial episodes of the Exandria Unlimited miniseries,[1] and in the first 14 episodes of the third campaign of Critical Role. At the end of the episode in which Dorian left the party, it was announced Daymond would return for a second installment of Exandria Unlimited.[2] On August 10, 2021, it was announced that he would be narrating the audiobook edition of Kith & Kin after Sumalee Montano left the project due to scheduling conflicts.[3]

In test games held before Exandria Unlimited, Robbie played a goblin named Flinttip "Flint" Bearscat, apparently a rogue, as his second test character. He appeared in Narrative Telephone as the subject of Robbie's story.[4] 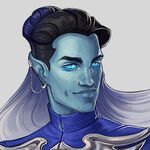 Robbie is of Native American and German descent. He has two children.