Critical Role Wiki
Register
Don't have an account?
Sign In
Advertisement
in: Non-player characters, Tieflings, Appeared in Chapter 11,
and 16 more

View source
watch 01:55
Cobra Kai Season 4 - The Loop
Do you like this video?
Play Sound

Marion Lavorre
"Ruby of the Sea"

The Ruby of the Sea

16
Marion Lavorre,[1] better known as the Ruby of the Sea, is Jester's mother and a prominent courtesan in Nicodranas. As an NPC, she is played by Matthew Mercer.

Marion is a tiefling with ruby red skin and dark red hair, from which her illustrious title is derived. She is graceful and alluring with a charming and delightful nature about her.

Marion is warm, jovial and motherly. Whilst truly astonishing, her appeal is said to in fact come from her wisdom and her intelligence, paired with her open heart and the comforting aura she exudes. She is also very perceptive and pays a lot of attention to detail, from both the shallower aspects of appearance and the more profound one of understanding human emotion and being able to read it. Marion fiercely loves Jester and cherishes her above everything. However, she harbors deep sorrow and regret regarding Jester's father, whom she still has nostalgic feelings for.[2]

Marion has a fear of the outdoors known as agoraphobia as revealed by Matt during "Talks Machina #82: 'Encroaching Waters'" (TMx82). Jester is aware of Marion's condition. In "A Dangerous Chase" (2x64) she tells the Mighty Nein she is under the impression that leaving the Lavish Chateau makes Marion anxious and that Marion feels safe there.[3]

Marion had a romance with a blue-skinned man named Babenon Dosal. According to her description, he came from an island, had dark hair, and wore lots of rings.[4] Babenon and Marion planned to get married and Marion was going to leave Nicodranas with him. He left to set up his house for them, but then never came back. It was unclear whether or not he knew that Marion was pregnant with their daughter, Jester Lavorre, at the time. Marion told Jester many loving stories about him when she was a child.[5]

In "Whispers of War" (2x18), Marion sent a package to the Pillow Trove for Jester. The package included a small vial of Marion's lavender perfume, 5 ink vials (red, blue, green, and two black), and 200 gold. Included was a letter to Jester:

I do so hope your journeys have been safe, fruitful, and wondrous.

I've always wished you to see the beauty of the world around us, and while the circumstances perhaps were not the most favorable, it has allowed you the freedom to become your own woman, to show all of Wildemount and beyond, the gifts you have to offer, and the joys you have to give.

My sweet girl, how I miss you. Your laughter, your energy, I've been sick in your absence. But it is a trial any mother must endure, I suppose. You're on your own now, and while I will always miss that little girl, I'm equally eager to see the woman that you will become.

Tensions here are less, but not absent. Given time, I hope things will vanish into the past, and you may come to see me once more. Until then, I have included a small trifle, some things to keep you comfortable, creating, and free.

Jester communicated with Marion via the Sending spell for the first time.[7]

The Mighty Nein met Marion for the first time after witnessing her perform at The Lavish Chateau.[8] Marion told the Mighty Nein she had been having trouble with a possessive client named Algar Dyomin threatening other clients of hers.[9] Jester insisted that they would take care of the problem for her. While discussing their travels, the Mighty Nein realized that The Gentleman resembled Marion's description of Jester's father, Babenon Dosal. [10]

Jester told Marion that Algar Dyomin has left Nicodranas but lied that she does not know why.[11] After the Mighty Nein have dinner at the Lavish Chateau, they decided to go out for the evening. Marion agreed to watch Nugget while they are out.[12]

As The Mistake left the docks in Nicodranas, Jester cast Sending to Marion and let her know that she is safe but they had to leave. She asked her to take care of Nugget. Marion replied that she hopes Jester and her friends stay safe and come back soon.[13]

Jester used Sending to speak with her mother letting her know she is on her way back to Nicodranas. Marion responded letting her know that the commotion caused by the Mighty Nein's hijacking The Mist from the docks seems to have died down, but she also warned Jester that it would be best to be cautious upon their return.[14]

Marion hosted the Mighty Nein at the Lavish Chateau when they came back to Nicodranas. She asked Jester to take Nugget with her when she left. Marion fought her agoraphobia to walk outside and see the Mighty Nein off before they left for Felderwin. She gave Jester a necklace with a ruby she had specially made. Jester gave Marion a jar of honey from Bisaft Isle.[15]

Jester communicated with Marion after the battle in the Barbed Fields as she was worried that her mother would be a target for Astrid and the Cerberus Assembly. Marion replied that the tone of Jester's voice worried her and she hoped Jester would come back soon.[16]

Yeza, escorted by the Mighty Nein is brought back to his family at the Lavish Chateau. While they were there, Jester decided to check in with her mother and tell her about their recent adventures.

Jester and the Mighty Nein arrived in Nicodranas prior to the peace negotiations between the Dwendalian Empire and the Kryn Dynasty. They went to the Lavish Chateau where Jester showed her mother the magical tattoo that Orly Skiffback had done, and asked for and received permission to use her bathtub for the ritual to transform Nott. Jester also told Marion that the Traveler is not actually a god, and described him. Marion recognized the description as someone she had seen at some of her performances in the past and asked the party if Jester was safe. They reassured her, and Fjord commented that Jester was more in control of the situation than you might imagine. Jester mentioned that Marion was invited to the Marquis Demesne to perform at the party the following night, and after hesitating, Marion agreed, saying that she'd been working on her excursions. The night of the party Marion felt nervous about leaving the Chateau, but was welcomed warmly and the Marquee's estate and her performance was well-received.

The Mighty Nein decided to take a quick vacation in Nicodranas after the events of Traveler Con. Jester came up to her mother's room and asked if her friends could stay the night and if she could perform for them. Marion agreed to do an impromptu performance for them and set the group up with specialty seats as well. Jester talked to her mother about Rumblecusp and if she was going to talk to the Gentleman again. Jester's mom said that Jester should just talk to him in person and ask if he wanted to come for dinner sometime.

Bluud has been Marion's personal bodyguard for a long time. Jester played with him when she was a child.[17]

Jester is Marion's only child. The two of them have lived in the Lavish Chateau for Jester's whole life. Marion loves Jester more than anything and is very proud of her. She kept Jester a secret from her clients because having a child is not good for business. She got Jester books and paints to occupy her time while Marion could not be with her. Marion encouraged Jester's creativity and fun loving nature.

Ever since Jester was sentenced to death, Marion has been trying to get the charges dropped. She has been very free with her money, sending Jester away from Nicodranas with five thousand gold[18] and sending another two hundred gold to Jester later in Zadash.[19]

Marion seemed to be unaware that The Traveler is real and has never seen him. She seems to have thought he was Jester's imaginary friend.[20] She is very proud of Jester for learning magic and going out on adventures.

Marion looked after Nugget from "Dockside Diplomacy" (2x35) until "Homeward Bound" (2x48) while the Mighty Nein were at sea. She seems to have kept Nugget inside Jester's old bedroom and never took him outside due to her agoraphobia.[21] She seemed relieved that Jester Lavorre was taking him with her when the Mighty Nein set out for Felderwin.

Babenon Dosal aka the Gentleman, is a former lover/fiance of Marion Lavorre. He is also Jester's biological father. 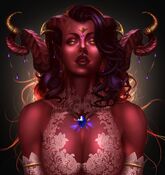 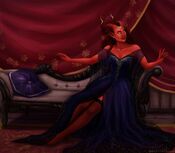 Fan art of the Gentleman and the Ruby, by Stephanie Brown.[art 8]