The Labenda Swamp was a darkened, tangled, thick swamp that surrounded the town of Berleben and the Ounterloch.[1] It was at the base of the Silberquel Ridge[2] and the Bromkiln Byway ran straight through it. At night, low, echoing howls could be heard coming out of it.[3] The swamp was inhabited by gators, venom trolls, mountain trolls, and merrows.[4][5]

The air in the center of the swamp was humid and prevented sweat from evaporating. The ever-present hum of the buzzing insects permeated the atmosphere, while the musky stench of decaying plants and stagnant water grew stronger the further in you go.[6] Along the edge of the lake, it was mainly soggy dirt and sand.[7]

It consisted of a mess of twisted vines and plant matter. In the center was one large fern-type plant with three or four large leaves spread outward that puffed a large, 30-foot wide cloud of yellowish pollen in the air. This plant could move but not very fast.[8]

There were a number of tall banyan trees and other thicker-trunked trees with gnarled bases and heavy, thick, vine-covered canopies.[9] However, light could still come through and although bits and pieces overhung the Bromkiln Byway, there was still open sky.[10]

The swamp had heavy puddles of swamp bog water[11] which often had giant gators resting just below the water surface.[12] Scattered across the swamp were thick tar-like boggy pools.[13]

In the morning, a very low fog lay across the surface of the water that was exposed in patches between the thick roots and soft rotting vegetation.[14] If a void was made within the ground, water would begin to fill up the space.[15]

There was a small collapsed gatehouse off the path to Berleben. The century-old stones from the gatehouse had long since been reclaimed by the roots and vines of the swamp.[16]

Outside of the swamp at the northern peak of the lake where it curved back into a southern area was the beginning of a path leading northward into the swamp to The Gentleman's safe house and storage facility. The path was marked with six daggers with pearl hilts that were jammed about five feet off the ground into the trees.[17]

At the base of the tree was a carved circular hollow and a slightly-decomposing long weathered curtain of heavy scaled leather-like material that had a bit of moss and algae growing on it. The curtain was hanging down and pressed, bolted, or nailed into it and was partially blocking an opening into the tree.[19]

Hanging from one of the branches was a cluster of old yellowed carved dried hollow bone chimes that were dangling from a piece of tanned or dried sinew. They were banging into each other occasionally when a breeze came through.[20]

There was a natural rot on the inside of the trunk that made it easy to carve it away. On the floor was a layer of bones of varying agew that were broken and chipped to the point where it gave a texture base to the floor. There appeared to be a matted pile of something in the corner.[21]

The Troll The hideout was inhabited by a bulbous troll with a deep green-blue skin tone with little pustules and boils on it at the edges of the shoulder and arm. It had long stringy black hair going past the front of the chest. His torso was swollen, with its belly protruding beyond it. Hanging around his neck were other pieces of hollowed bone, very similar to the chime. The pustules and part of its body had thick green liquid oozing out in places. It had long fingers and was breathing heavy.[22] 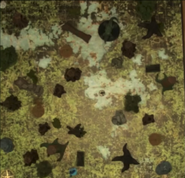 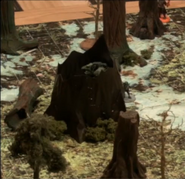 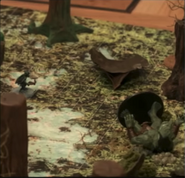 Retrieved from "https://criticalrole.fandom.com/wiki/Labenda_Swamp?oldid=125643"
Community content is available under CC-BY-SA unless otherwise noted.