Jrusar is marked by five reddish rocky spires rising hundreds of feet above the jungle around and between them. It's theorized that the five spires were once one mountain that was destroyed by an unknown force during the Calamity.[1]

The spires are connected, in part, by wire gondolas,[2] which are available for public use for a small fee (1 silver piece)[3] and which are controlled in part by stone automatons.[4] The only rigid bridge connecting any of the spires is the Fatewalk, a wide stone bridge hundreds of feet long that connects the Core Spire and the Lantern Spire.[5] Near the steps at the base of Jrusar live outcasts and people who wish to be free of the city's business structure.[6]

The Aerie Spire is the tallest of the five spires but is thinner than the Core Spire, and most of the construction on it is toward its top.[7]

The Core Spire is the largest, but not the tallest, of the spires.

Those entering the city on foot do so through the Lantern Spire, which has a thriving market in travel and tourist goods.[20]

The Lucent Spire is the second tallest spire[30] and home to many wealthy denizens of Jrusar.[31]

To the northwest of the Core Spire, the smallest spire serves as the industrial area of the city. It is full of factories belching colored smoke, and there is a lot of mining of metal, fuel,[36] and gems.[37] There are also some residential portions.[38]

Because Jrusar's skyship port, like Ank'Harel's, is considered "open" instead of the more closed-off ones elsewhere on the continent, Jrusar is a cultural mixing pot, borrowing rites from many traditions.[46]

People of many races commingle in Jrusar, to a greater degree than typically seen in Exandria: humans, dragonborn, dwarves, eisfuura, elves (including drow), gnomes, goblins, goliaths, halflings, katari, ogres, orcs, and pachydans, among others. The city is also home to half-elves, half-orcs, and uniya, people who are both half-orc and half-elf.

There are several noble houses in the Oderan Wilds, known as the Mahaan houses, and many of them live in Jrusar, benefiting from their position. However, others are genuinely benign and try their best to improve the city.

Some of the noble houses are the following: 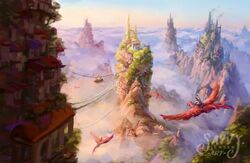