From time to time, guest players join the show for a night or two. They typically enter the game with characters of similar level to the main cast. 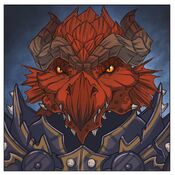 Arkhan, Dragonborn Paladin
A servant of Tiamat, he helped Vox Machina defeat Vecna. He is played by Joe Manganiello. 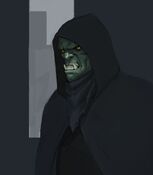 Garthok, Half-Orc Rogue
A member of the Clasp, he helps Vox Machina navigate Emon's ruins. He is played by Jason Charles Miller. 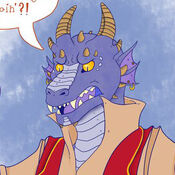 Gern Blanston, Dragonborn Wizard of Necromancy
Gern employs magically imbued candles and thralls, which he calls friend-pets, to great effect. He is played by Chris Hardwick. 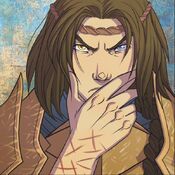 Kashaw Vesh, Human Cleric
Betrothed at birth to a dark goddess named Vesh, and married to her in a sadistic ritual at fifteen years of age, Kashaw reluctantly accesses that divine connection for his cleric abilities. Kashaw is played by Will Friedle. 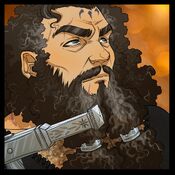 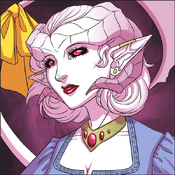 Lillith Daturai, Tiefling Wizard
Specializing in the School of Illusion, Lillith uses magic to hide from her sisters. She is played by Kit Buss. 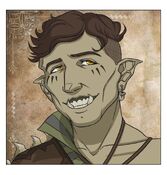 Lionel Gayheart, Half-Orc Bard/Barbarian
An absentminded but kind-hearted half-orc, Lionel meets with Vox Machina at the request of his mysterious boss known as "the Meatman". He is played by Jon Heder. 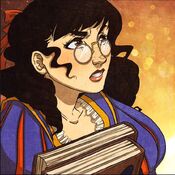 Lyra, Human Wizard
An awkward yet endearing member of the Slayer's Take, she harbors an unrequited love for her guildmate, Aldor. She is played by Felicia Day. 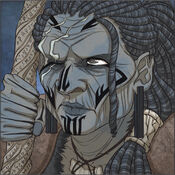 Shale, Goliath Fighter
An elderly, disabled goliath from the Herd of Storms, she is both brave and wise. Shale is played by Chris Perkins. 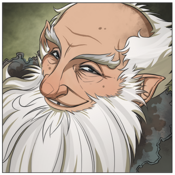 Sprigg, Gnome Rogue
An elderly gnome who isolated himself from the world after the death of his companions. Despite his eccentricities, Sprigg shows surprising insight. He is played by Darin De Paul. 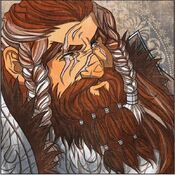 Thorbir Falbek, Dwarf Fighter
Thorbir may seem irritable, impatient, and blunt, but it seems he has a soft spot for his daughter. Thorbir is played by Wil Wheaton. 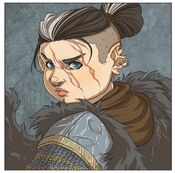 Tova, Dwarf Blood Hunter
Rather brusque, Tova knows to take an opportunity when it presents itself and temporarily joins Vox Machina for a chance at revenge and freedom. Tova is played by ND Stevenson. 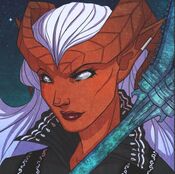 Zahra Hydris, Tiefling Warlock
Powerful and mysterious, Zahra overcomes the mistrust of Vox Machina with her prowess in battle against the white dragon Rimefang. Zahra is played by Mary Elizabeth McGlynn. 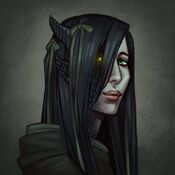 Calianna Mordsson, Half-Elf Sorcerer
One-tenth dragon, she is an ex-cult member who was once worshiped. She escaped and set on her quest to make sure the cult could not do to others as they did to her. She is played by Mark Hulmes. 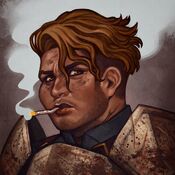 Keg, Dwarf Fighter
Keg is a stout, muscular dwarven woman with a 5 o'clock shadow and short, greasy hair. In the morning when she first encountered the Mighty Nein, she had a cigarette hanging out of her mouth. She is played by Ashly Burch. 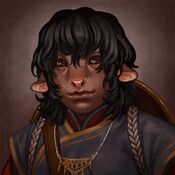 Nila, Firbolg Druid
Nila is naive ad sheltered, having very little experience with the world beyond her firbolg tribe. She has a round face with a wide nose and soft, floppy ears. She is played by Sumalee Montano.

Reani, Aasimar Druid
Instructed by her angel guide Samliel, Reani helped the Mighty Nein track down a white dragon during their time in Uthodurn. She is kind and helpful, but her black-and-white view of morality is wont to cause trouble. She is played by Mica Burton. 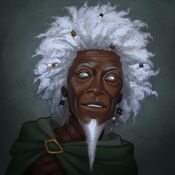 Shakäste, Human Cleric
On a scale of one to ten, Shakäste describes himself as "striking", and he is old enough that he has gotten past all the "bacheloring". Shakäste is generally forthright and a charismatic figure. He is played by Khary Payton. 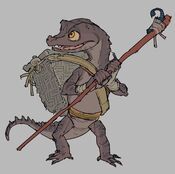 Spurt, Kobold Inventor
A young and naïve kobold hailing from a tribe living under the Ashkeeper Peaks. Accompanied by his weaponized "pets" he aids the Mighty Nein after they promise him food. He was played by Chris Perkins. 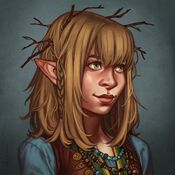 Twiggy, Gnome Rogue
A mischievous gnome from Port Damali, she stowed away on the Balleater with her pet squirrel Trixie, and upon her discovery she presented the Mighty Nein with her "Happy Fun Ball of Tricks". Little did the group know the adventure it would take them on. She is played by Deborah Ann Woll. 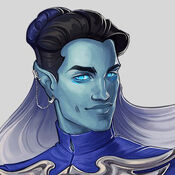 Dorian Storm, Air Genasi Bard
A socially-anxious musician and a noble exploring the world, Dorian is a core member of Bells Hells until outside forces whisk him far away. He is played by Robbie Daymond.
Community content is available under CC-BY-SA unless otherwise noted.
Advertisement