Critical Role Wiki
Register
Don't have an account?
Sign In
Advertisement
in: Kraghammer and Vasselheim arc, The Briarwoods arc, The Chroma Conclave arc,
and 4 more

Emon
Greyskull Keep was the home of Vox Machina. It is located in the Republic of Tal'Dorei, just outside the slums of Emon on the southern side.[1]

Greyskull Keep is on top of a grassy hill surrounded by a river to the south of the city. A massive gate blocks the entrance to the courtyard of the keep, usually guarded by at least one person at all times. An iron bell is situated at the top of the keep to alert everyone inside of new arrivals.[2]

A temple to Sarenrae is located near the bottom of the keep. The roof is about two stories in height, with an opening at the top to allow light to shine on the altar at the end of the room. On the two walls that lead up to the shrine on either side are windows ordained with colored glass. There are trees and bushes in pots along the sides, and wooden benches set up in rows facing the altar.[3]

A communal dining area that consists of four large round wooden tables.

Section of the keep where the rooms of the various members of Vox Machina and their staff reside.

Room where a large part of Vox Machina's finances are kept.

Prior to completion, Vox Machina hired staff to take care of the place. They also hired guards, using Grog's idea of having each guard pull a straw and fight to the death to determine who was strong enough to defend the keep. Guards (aside from the captain) were generally paid 100gp per month, while servants were paid 50.[4] 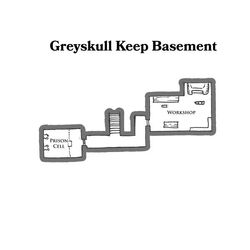 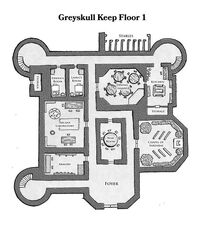 Official map of Floor layouts of Greyskull Keep, by Matthew Mercer from 'Twitter.[art 4] 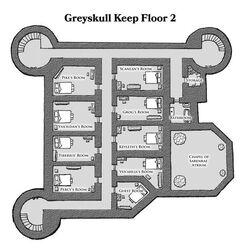 Pike Trickfoot summoned a planetar of Sarenrae to repair the damage to Greyskull Keep following the attack of the Chroma Conclave.[8]

The Legend of Vox Machina

After defeating the blue dragon Brimscythe, Vox Machina was rewarded with a title deed and key to an unnamed keep where they could live and be kept on retainer in case other threats to Emon should arise.[9] The keep was somewhat derelict, overgrown with vines and crumbling in some places, and had no staff.[10] Scanlan mentioned selling it but was met with disapproving looks from Sovereign Uriel, Kima, and Allura.

The next day, Lady Allura visited the party at breakfast and informed them about a feast to be hosted by Uriel to discuss matters. After the altercation with the Briarwoods at the feast, the party was sent to the keep and told to remain under house arrest supervised by Jarett Howarth. There, they were attacked by wraiths.[11]