810 PD in the Chroma Crisis

Sale and creation of magic items

Emon
Gilmore's Glorious Goods is a magical shop in the Abdar's Promenade district of Emon, owned and run by Shaun Gilmore.

The building itself was wide and only a single story, and it was described by Matthew Mercer as "the worst or best funhouse to enter, based on your opinion." The exterior was made up of deep blue and purple fabrics draped over the building, which had been painted with various colors. The entryway had no door, but rather many beads and cloth drapes that were meant to be pushed aside.

The interior of the shop was magically enchanted to be bigger on the inside than it was on the outside. In reality, the business was quite a large two-story building. Incense and perfumes permeated the place, "like a terrible medieval Sephora". A series of ever-burning candles in sconces adorned the walls. On the first floor, tables bearing glass cases resided within the center of the room, and there was a long, wooden counter on the far end. Behind that was the entrance to Gilmore's private quarters. On the far left wall was an area where an herbalist worked on various potions. The second story was where adventuring gear could be found, such as belts, armor, weapons, and enchanted rings.

The rebuilt shop in Emon, by 842 PD, had an illusion on its frontage sign allowing people to see the name of the shop in whatever their first language is.[1]

The members of Vox Machina were regular customers of Gilmore's. They earned a sponsorship after saving the royal family of Emon. The main perk of this sponsorship came in the form of a significant discount.

Just before the Chroma Conclave's attack in late 810 PD, Gilmore had been working to open a second shop in Westruun. However, his storefront and much of his inventory was destroyed (or looted) during Thordak's occupation of Emon.[2] By 812 PD, after the dragons were defeated by Vox Machina, Gilmore rebuilt his shop.[3]

In 842 PD, Lorkathar sent an adventuring party to Gilmore's Glorious Goods to seek Gilmore's guidance about the rune that appeared on the newly raised plateau near Flamereach Outpost.[4] By that time, Gilmore had set up a franchise in Marquet.[5]

The shop was staffed by Gilmore and his employees, who dressed in blue and purple robes similar to the cloth draped over the building itself. 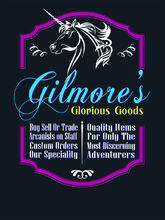 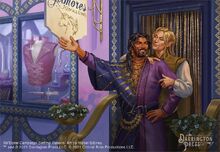 Official art of Gilmore in front of his shop, hugged by Darius, by Isabel Gibney.[art 4]