Critical Role Wiki
Register
Don't have an account?
Sign In
in: Companions, Fey, Appeared in Chapter 9,
and 13 more

View source
watch 01:23
Wiki Targeted (Entertainment)
Do you like this video?
Play Sound

Frumpkin was the familiar of Caleb Widogast. Although he is actually a fey creature capable of assuming many forms, Caleb usually summoned him in the form of a Bengal cat. As a companion, he was controlled by his summoner, Liam O'Brien, with assistance and communication from the Dungeon Master, Matthew Mercer.

Although Frumpkin's usual form is that of a Bengal cat (white, as of "The Calm Before the Storm" (2x130)), through the Find Familiar spell Caleb can change his form into various creatures including that of a: 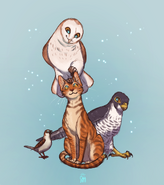 Fan art of Frumpkin as a peregrine falcon, by BlackSalander.[art 7]

Caleb Widogast first summoned Frumpkin a few years prior to the beginning of the campaign. Frumpkin was created in the form of Caleb's previous family cat, which he was also named after. He served as Caleb's only friend for a few years before meeting Nott in prison. Caleb considers Frumpkin to be very important to him, and seems to view him as emotional support at times.[presumed]

Recalling a previous adventure, Frumpkin had taken the form of an octopus and was used as a cushion to break Nott's fall out of a burning building.[19]

Frumpkin disappeared in "A Show of Scrutiny" (2x02) due to a gnoll attack reducing his bird form's hit points to zero.[20] "Hush" (2x07) marked Frumpkin's first full episode absence. In the episode following this absence, Caleb resummoned Frumpkin in his cat form.[21]

Frumpkin was kicked by a member of the Crownsguard while trying to get into Zadash's Tri-Spires district and his hit points were once again reduced to zero.[22]

As the Mighty Nein sailed from Nicodranas to Urukayxl, Caleb changed Frumpkin's form to a tiny one-ounce elf owl and loaned him to Beau.[23] Frumpkin stayed in that form until the Mighty Nein reached Urukayxl. Caleb had him land on Avantika's dagger and attempted to cast Identify through Frumpkin on her weapons while she was sleeping. Avantika was not actually sleeping and immediately killed Frumpkin. Caleb summoned Frumpkin again in the elf owl form.[24]

In a private conversation with Frumpkin, Caleb admitted to him that he didn't believe they were all going to survive the upcoming fight with the Tombtakers, but that it was a win-win for Frumpkin. If the Nein all died he would get to go back to his home. If Caleb survived, he intended to let Frumpkin go anyway, because he wasn't Caleb's cat. Caleb's cat was dead. He then changed Frumpkin from his usual Bengal color to pure white.[25] Caleb kept his promise and released Frumpkin from his service in the Blooming Grove.[26]

Caleb loves Frumpkin dearly, and despite his existence as an immortal fey entity, usually treats him like an ordinary pet cat. When not in battle or utilizing Frumpkin's ability to transform into other animals for the purposes of reconnaissance, Caleb will keep Frumpkin draped across his shoulders or loan him to the other members of the Mighty Nein should they require comfort.

Whilst Kiri was initially startled by Frumpkin appearing in her arms and somewhat nervous, she very quickly grew enamored with him and was quite happy to cuddle him, mostly due to his calm and friendly nature.

Despite the fact that Nott has eaten Frumpkin twice, he does not seem to hold a grudge and is generally friendly towards her, although this might be because of the high regard Caleb holds Nott in.

Due to her upbringing in Xhorhas without any pets or many other animals "except the rats, that they ate", Yasha had never met a cat before Frumpkin. However, she shows a fondness for the cat and likes his purring.

As a familiar, Frumpkin could appear, disappear, and/or reappear at Caleb's whim (requires one action). Caleb could issue telepathic commands to Frumpkin. Caleb could transfer his senses to Frumpkin, though this rendered Caleb's body temporarily blind and deaf. When Frumpkin lost all hit points or when Caleb wanted to change Frumpkin's form, Caleb could cast Find Familiar again to bring Frumpkin back or change his form.