Fearne Calloway (pronounced /ˈfɜrn/) is a faun druid/rogue and member of the Crown Keepers and later Bells Hells. She is played by Ashley Johnson.

Fearne is a six-foot-tall faun[11][12] with large eyes, large furry ears,[13] and sea-foam green hair.[14] Her hooves have bits of moss around them. She wears flowy clothing and is covered in poisonous flowers including hemlock and oleander.[15]

As she got nearer to the gate to the Feywild, her appearance changed. One of her eyes changed from a humanoid to a goat-like pupil, and the flowers she wears began to turn and open.[16]

After holding the Circlet of Barbed Vision, her hand blackened and became claw-like.[17]

Fearne is unperturbed and direct, and shows an appreciation for nature.[citation needed] Her soft, demure voice contrasts with her somewhat erratic, insensitive, and self-possessed behavior, in much the same way as the wonderful-looking flowers she wears are actually all poisonous. Fearne loves to collect various trinkets,[18] and she enjoys stealing them.[19] In combat, she always goes for the kill.[20]

Fearne traveled from the Feywild to the Prime Material Plane through the gate built by Vox Machina for Artagan.[21][22]

At home in the Feywild, Fearne had a beautiful bedroom where she kept all of the trinkets she had stolen on her travels around the world.[23] At some point, she had fey animal friends named Sweet Pea, Bumpers, Peepers, and Dr. Nesbitt. Nesbitt was a bird, and the other three were a bear, a crocodile, and a rabbit, though it is not necessarily clear which was which.[24][25]

At some point before Fearne left the Feywild, her parents became outcasts.[26] She last saw her parents around 90 years before Campaign Three (or around 753 PD).[27] In Quen'pillar or Cuersaar 842 PD, she came to the Material Plane to explore, to see the rest of the world, and to find her parents, whom she hadn't seen in "a very long time".[28][29]

With the rest of the Exandria Unlimited party, Fearne woke up in a house in Emon with no memory of the preceding week. When the party found a baby ankheg in a warehouse they robbed, she was very worried about it and had to be talked out of going back to get it.[30] Later, she suggested taking the crown they had found to her grandmother Morri Calloway in the Feywild, but wasn't sure how to get there right now.[31]

During the battle on the Oh No Plateau, Fearne transformed into a dire wolf and was able to save Little Mister when Dariax attacked him while thinking he was an enemy.[32] She was also instrumental in getting the group away from Poska's attempted kidnapping by casting Charm Person on Poska and convincing her to tell the Nameless Ones to stand down.[33]

During the party's travel south toward Byroden, Fearne realized they were on the road she took to travel to Emon. While in the main thick of the Verdant Expanse, she led the group off the Wildwood Byway and deeper into the woods, feeling a strong sense that she needed to check something. Her eyes began looking more goat-like. They reached an open glade with a strange gate in its center, which Fearne recognized as the gate she came through from the Feywild. She found herself wanting to go through the gate, but when she tentatively put her hand in, a misshapen twin stepped out wearing the Circlet of Barbed Vision. The creature invited Fearne to come home, saying, "I found my power," and a battle ensued.[34]

Fearne took part in the Gem of Byroden pageant, but failed to place. Along with others in the party, she dreamed about the Circlet and heard the voice of Lolth,[35] and she was contacted by the Wildmother at the obelisk near Qoniira.[36] At the cube within the ruins of Niirdal-Sarqet, Fearne deciphered the final side, seizing control of it, causing it to shatter apart and release a bright blue miasma of arcane energy.

In the final battle, Fearne again utilized her dire wolf form. The party decided to stay together for at least the time being.[37]

Following the events taking place in Exandria Unlimited, the party returned to Byroden. When Keyleth sent Orym on a mission to Marquet, she told him that his friends Fearne and Dorian could be helpful. Keyleth used Transport by Plants to sneak them to the skyship port in Emon, on which they traveled eventually to Jrusar.[38] They soon found themselves responding to a mysterious attack of animated objects in the streets, fighting alongside Ashton Greymoore, Fresh Cut Grass, Imogen Temult, and Laudna, and they attracted the attention of Bertrand Bell, who promised to make introductions to high-placed people in the city.[39]

Fearne's grandmother, Morri Calloway,[40] who Fearne says is extremely intelligent,[41] sent her from the Feywild to Exandria. She passed through a gate and arrived near Syngorn.[42]

Fearne's parents are outcasts. Fearne is told by a dark version of herself that the Archfey Elmenore wants Fearne back.[26] After the battle that follows, Fearne could feel the displeasure of Elmenore at the dark alter ego's failure.[43]

Little Mister is Fearne's wildfire spirit, a monkey whose mouth is a gaping furnace, burning anything that he decides to eat.[44] Little Mister is also energetic, especially when he was running with Opal to the docks.[45]

Fearne and Orym have contrasting personalities: she with a chaotic fey nature and he soberly making a conscious effort to do good and not screw people over. Despite Orym's worrying about the trouble Fearne will get herself and the party into, they are attentive to each other and get along well.

Ashton and Fearne seem to get along with one another, and enjoy each other's mischief. They pickpocketed her when they first met, stealing a large earring of the Allhammer's symbol,[46] which she herself stole from a pachydan priest she met on her first day in Jrusar.[47] She then stole the earring back and offered it to Preio Madali as payment for a bottle of Elvish alcohol.[48] In return, Ashton stole the chamber pot with a flower growing out of it (which she originally lifted from Dugger's house) when she was blinded by electric shock. She offered to let Ashton drink some of the liquor out of her hair after Bertrand Bell accidentally threw it at her.[49]

Fearne's character stats were rerolled between Exandria Unlimited and Campaign Three. Her original stats at level 2 were:[50]

Fearne always has these spells prepared.

Fearne has access to all druid class spells. As a 5th-level druid, she can prepare up to nine spells per day.[66]

Fearne was initially developed as a character concept for Campaign Three and was brought into Exandria Unlimited for further development. Afterward, Ashley had the option to choose another character for the campaign, but she chose to continue playing Fearne. Her stats were then rerolled under the same rules as other characters in Campaign Three and prior campaigns: using the rolled method in the Player's Handbook with a homebrewed rule that if the sum of the scores was less than 70, they could reroll the scores.[82]

Fan art of Fearne, by BlackSalander.[art 9] 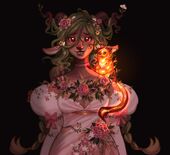 Fan art of Fearne and Little Mister, by pixelllls.[art 10]

Fan art of Fearne stealing a costume, by Kiera James.[art 11] 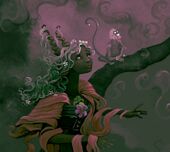