watch 01:50
Wiki Targeted (Entertainment)
Do you like this video?
Play Sound

Death from Above is the name given to the flying broom[1] that Vex'ahlia stole from Gern Blanston.[2]

During Vox Machina's encounter with Gern Blanston in Cindergrove, they formed a tentative alliance.  While battling an efreeti, Vex'ahlia offered to hold his broom of flying.  After the battle, she slipped it into Grog's Bag of Holding and lied to Gern, telling him that the broom fell into the lava.[3]

The broom only flies once its command word (the word "candle" in Draconic) has been spoken.[4] It can carry up to 400 pounds, although its flying speed is reduced to thirty feet when it is carrying more than 200 pounds.

Percy began making tinkering with attachments to Death from Above to improve Vex'ahlia's stability while flying for better aim with her bow, as well as to ensure that she wouldn't lose or become separated from the broom if she fell from it.[5]

Although Percy added a seat for the primary rider, Vax'ildan commented that riding it as a passenger was very uncomfortable for him as a male, and he joked that Vex'ahlia may have done Gern a favor by stealing the broom from him.[6]

During Vox Machina's fight against Kevdak and the Herd of Storms, Vex'ahlia saved Grog Strongjaw's life by swooping down on Death from Above and placing Grog in Raven's Slumber.[7]  She later released him from the necklace directly above Kevdak, helping him land the killing blow against his uncle.[8]  Due to the circumstances of the fight and their opponents' determination to kill rather than simply knock individuals unconscious, Vex'ahlia's strategic use of the broom to give Grog the killing blow may have prevented a total party kill (TPK).

Fan art of Vex'ahlia flying on Death from Above, by Megzilla87.[art 2] 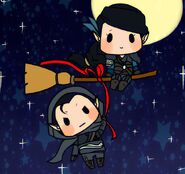 Fan art of Vex'ahlia flying over the Feywild on Death from Above in "The Feywild" (1x59), by NLN4.[art 4]
Add a photo to this gallery

Retrieved from "https://criticalrole.fandom.com/wiki/Death_from_Above?oldid=126073"
Community content is available under CC-BY-SA unless otherwise noted.