watch 01:50
Wiki Targeted (Entertainment)
Do you like this video?
Play Sound

Critical Role: Vox Machina Origins is a comic series published by Dark Horse Comics. It tells the story of how the members of Vox Machina initially met one another and formed their group. The comic is written by Matthew Mercer and various co-authors, with art by Olivia Samson.

Issue #1 was released on September 20, 2017 and features half-elf twins Vax'ildan and Vex'ahlia trying to solve a mysterious curse afflicting the residents of Stilben. Along the way they run into a young druid named Keyleth who believes the "curse" is actually an intentional poisoning of the water supply.

Issue #2 was released on October 18, 2017 and switches perspective to focus on Scanlan Shorthalt and Grog Strongjaw, two members of a mercenary group in the process of clearing out the temple of a fish god. Upon returning to Stilben, they encounter a sorcerer named Tiberius Stormwind who is also investigating the curse plaguing the villagers.

Issue #3 was released on November 29, 2017. Keyleth and Tiberius find themselves in unsavory company, but that's the only kind of company to be found in Stilben. Paid by the Clasp to stop the attack on the peasants, our heroes follow their noses and uncover an alchemical laboratory hidden in the city's sewer.

Issue #4 was released on January 24, 2018. The sinister Iselda has kidnapped Vax, and Vex must swallow her pride to ask for aid from the other heroes. But when they refuse, Vex decides to retrieve a friend outside of town . . . but not before Keyleth catches up to her and pledges to help.

Issue #5 was released on March 7, 2018. Vax is alone on the Myriad's floating fortress galleon, The Mockingbird. Vax fights his way to freedom with nary a weapon or ally around save his wits and agility to escape his captors.

Issue #6 was released on April 18, 2018. The heroes, reunited at last, board the Mockingbird and fight their way to Iselda as well as the source of the poison that has been plaguing the inhabitants of Stilben.

Issue #1 was released on July 10, 2019. Their escapades in Stilben lead them toward new adventure, and a dire threat to Grog when he goes missing in the night. Tracking him down will see the party lose one member, gain another, and reveal parts of Grog's secret past. But first, his friends have to actually find him.

Issue #2 was released on August 14, 2019. The members of Vox Machina track the missing Grog back to his old home in Westruun, where he appears to have been drawn to the local cursed mountain. Giant spiders, evil skeletons, and something even more nefarious stand in the unlikely heroes' way when they venture under the mountain to find their friend.

Issue #3 was released on September 18, 2019. Not even Pike's holy healing could remove the scar Grog received during the ritual his friends interrupted under Gatshadow, but reaching people who could provide answers is difficult. As often happens in these situations, a stranger approaches the party with an offer: he'll get them access to a wizard's tower in exchange for stealing a magical item while they're there.

Issue #4 was released on December 18, 2019. Step one: find a nymph heart. In order to save Grog, Vox Machina splits up to find the rare ingredients that will stop the lich Drath Mephruhn from returning. But nymphs are dangerous, scarce, and not particularly fond of giving up their hearts to adventurers, so the odds aren't good for Vex, Vax, Trinket, and Grog as they enter the wintery Frostweald in search of the only nymph left in Tal'Dorei. But hey, since when have poor odds stopped Vox Machina?

Issue #5 released on February 19, 2020. Let the nightmare begin! Or rather, manifest. Keyleth, Pike, and Scanlan have journeyed to the Umbra Hills to find the skull of a nightmare. Grog's survival depends on their success (no pressure), but the cult that has supposedly been conjuring the magical beast is nowhere to be found! Unless, of course, the mysterious stranger in the local jail is right, and the nightmare cult members are right under Vox Machina's nose!

Issue #6 released on June 3, 2020. The hour of the ritual is at hand! Whether Grog returns to his cluelessly adorable self or transforms into the murderous lich Drath Mephrun is still a big fat question mark. Vox Machina is as prepared as they're going to be, armed with spell components, new allies, and a whole lot of loyalty. But will it be enough? Don't miss the series arc finale! Inspired by the Critical Role web series. 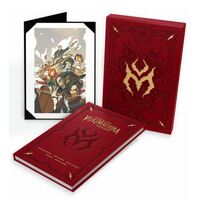 It was announced[1] that Vox Machina Origins Series III would be released on 10 February 2021,[2] with the same creative team as Volume 2: Matthew Mercer co-writing with Jody Houser, Olivia Samson drawing the book, MSASSYK coloring, and Ariana Maher lettering.

Issue #1 released on February 10, 2021. "The good life never lasts. After paying off their debt to Drez Vina, Vox Machina enjoy a week in Westruun's lap of luxury. But that costs coin, which has a bad habit of running out. So to keep themselves in the black (and the taverns, and the brothels) they agree to join an underground fighting ring. But before they can bash their way to cash, their attention is snagged by the case of a missing child."[3]

Issue #2 is scheduled to release on April 28, 2021. "Prepare for a grudge match! Vox Machina enters the ring in an underground fight club, in search of coin to fund their next round of debauchery. But their hopes for easy money are dashed when they're confronted with a familiar unfriendly face. Expect fierce fights, foul play, and a hefty helping of magical smackdown from this latest installment with your favorite band of adventurers!"[4]

Retrieved from "https://criticalrole.fandom.com/wiki/Critical_Role:_Vox_Machina_Origins?oldid=120472"
Community content is available under CC-BY-SA unless otherwise noted.