View source
watch 02:07
Spider-Man: No Way Home Trailer Dropped - The Loop
Do you like this video?
Play Sound

The calendar was established by elves in an ancient age, and the names of the days and months have stood the test of time, being used by civilizations throughout the world.[1][2] 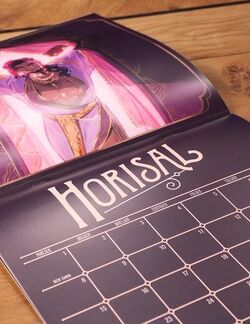 Spring begins early in the month of Dualahei, officially starting on the 13th with the Renewal Festival.

Summer begins in the middle of Unndilar, officially starting at noon on the 26th day known as the Zenith.

Autumn begins early in Fessuran, marked by the Harvest's Close on the 3rd day.

Winter begins on the 2nd day of Duscar, the Barren Eve, which is a nighttime celebration and remembrance of those who fell in battle.

New Dawn
1st of Horisal
The first day of the new year is also the holy day of Avandra, the Changebringer, as the old year gives way to a new path. Emon celebrates New Dawn with a grand midnight feast, which commonly features a short play celebrating the changes witnessed in the past year.[5] On the Menagerie Coast, New Dawn is celebrated with feasts on the shore at dusk the day before to watch the sunset. The feast continues through the night as celebrants discuss their hopes for the new year until the sun rises.[6]

Day of Challenging
7th of Misuthar
The holy day of Kord, the Stormlord is typically celebrated with a tournament called the Godsbrawl. The Day of Challenging is one of the most raucous holidays in Emon, and is also widely celebrated in Port Damali. Thousands of spectators attend the annual Godsbrawl, which is held in the fighting ring within each city's respective Temple of the Stormlord. The people root for their deity's favored champion, and there is a fierce (yet friendly) rivalry between the Champion of the Stormlord and the Champion of the Platinum Dragon. The winner earns the title of "Supreme Champion" for an entire year.[7][8]

Renewal Festival
13th of Dualahei
The first day of spring is celebrated on this day.

Wild's Grandeur
20th of Dualahei
Though the Archeart is the god of spring, the peak of the spring season is the holy day of Melora, the Wildmother. The people in the southern wilds of Tal'Dorei celebrate the Wildmother's strength by journeying to a place of great natural beauty. This could be the top of a mountainous waterfall, the center of a desert. Though Emon rarely celebrates Wild's Grandeur, the few who do will plant trees in observance of the holiday.[7] The people of the Menagerie Coast take this day to sail for pleasure and observe the beauty of their surroundings. Those who partake in elements of Ki'Nau culture take the day to appreciate the fruits and foods given by the sea, and leave offering of delicacies and handmade crafts at altars of twisted roots and grasses.[9]

Harvest's Rise
11th of Thunsheer
The celebration practices of Harvest's Rise are unknown, but is presumably the beginning of the planting season.

Deep Solace
18th of Unndilar
The holy day of Moradin, the All-Hammer is celebrated by especially devout followers in isolation. They meditate on the meaning of family and how they may be better mothers, fathers, siblings, and children. Dwarven communities, such as Kraghammer and Grimgolir, celebrate with a full day of feasting and drinking.[10][11]

Zenith
26th of Unndilar
Summer begins at high noon and is celebrated with games, displays of magic, and black powder fireworks.[12]

Artisan's Faire
15th of Brussendar
The celebration practices of Artisan's Faire are unknown, but is presumably a crafts festival.

Elvendawn, also known as Midsummer
20th of Brussendar
The holy day of the Corellon the Arch Heart celebrates the first emergence of the Elves into Exandria from the Feywild. In Syngorn, the elves open small doorways into the Feywild and celebrate alongside the wild fey with uncharacteristic vigor.[10] The elves in Bysaes Tyl celebrate similarly to those in Syngorn, but it is a much quieter affair, as worship of Corellon is banned within the Dwendalian Empire. Still, the elves on this day often have a little more wine than usual.[13]

Highsummer
15th of Sydenstar[14]
The holy day of Pelor, the Dawnfather is the peak of the summer season. Emon celebrates with an entire week of gift-giving and feasting, ending at midnight on the 21st of Sydenstar (the anniversary of the Battle of the Umbra Hills, where Zan Tal'Dorei dethroned Trist Drassig).[5] Whitestone, where the Dawnfather is the city's patron god, celebrates with gift-giving and a festival of lights around the Sun Tree. When money was thin following the Briarwood occupation, most Whitestonians choose to recount the small things they are thankful for, rather than buy gifts.[5] The Dwendalian Empire uses this day as an opportunity to promote enlistment to the Righteous Brand, which holds great feats and hands out toy soldiers and other propaganda.[11]

Harvest's Close
3rd of Fessuran
Autumn begins on this day and is typically celebrated with feasting in rural regions and with carnivals in the cities.[12]

Hazel Festival
10th of Quen'pillar
The typical celebration practices of Hazel Festival are unknown, but the non-canonical "Trinket's Honey Heist" (Sx27) takes place during the Hazel Festival in Westruun, where it has the atmosphere of a fair or autumn festival, with fried food, alcohol, and prizes for agricultural goods.[15]

Civilization's Dawn
22nd of Quen'pillar
The holy day of Erathis, the Lawbearer is the peak of the autumn season. Emon celebrates with a great bonfire in the square of each neighborhood, around which each community dances and gives gifts.[16] In the Dwendalian Empire, people celebrate with feasts in honor of the Dwendal bloodline. One seat at each table is left open for the king, who eats in spirit with his subjects.[17]

Night of Ascension
13th of Cuersaar
Though the actual date of her rise to divinity is unclear, the holy day of The Raven Queen is nonetheless celebrated as the day of her apotheosis. Though most in Emon see this celebration of the dead as unnerving and macabre, the followers of the Matron of Ravens believe that the honored dead would prefer to be venerated with cheer, not misery[18] In the Dwendalian Empire, the Night of Ascension was once a similar cheery celebration of the dead, it has become an occasion to burn effigies and decry the Kryn Dynasty for their unnatural relationship with death.[19]

Zan's Cup
21st of Cuersaar
This holiday is only celebrated on Tal'Dorei. The celebration practices of Zan's Cup are unknown, but is presumably related to its namesake Zan Tal'Dorei.

Barren Eve
2nd of Duscar
Winter's longest night is a day of mourning for those lost in war. Candles are commonly lit to commemorate those who were lost.[1][12]

Embertide
5th of Duscar
The holy day of Bahamut, the Platinum Dragon is a day of remembrance. Solemnity and respect are shown to those who have fallen in the defense of others.[7][6]

Day of Heart and Hearth
16th of Duscar
A secular holiday celebrated in parts of Wildemount. In the Dwendalian Empire, it involves an outdoor celebration in the snow followed by an indoor celebration with family. On the Menagerie Coast, it's simply an excuse to party.[20] It can be considered the Wildemount equivalent of Winter's Crest.[21]

Winter's Crest
20th of Duscar
This day celebrates the freedom of Tal'Dorei from Errevon the Rimelord at the end of the Icelost Years.[22] It is often celebrated with omnipresent music in public areas, lavish gift-giving to relatives and loved ones, and the cutting and decorating of trees placed indoors. The Sun Tree in Whitestone is often decorated with lights and other baubles for Winter's Crest. Because it is the peak of the winter season, devout followers of the Matron of Ravens consider it to be one of her holy days, as she is the goddess of winter.[18] Winter's Crest is also when the barrier between planes is at its thinnest. Because of this, some perform rituals concerning other planes on this day, such as the Briarwoods planning to perform their ritual within the Ziggurat beneath Whitestone to aid their master Vecna, or when Raishan was able to tear open Pyrah's rift to the Elemental Plane of Fire and allow Thordak back into Exandria.

Herdsmeet
Once every decade
Every ten years, centaur herds across the Dividing Plains of Tal'Dorei gather at the Throne of the Archeart to discuss politics among their tribes and pay homage to their patron god, Corellon the Archeart.[23]

Moonweaver's Holy Night
Night of the largest full moon of the decade
Sehanine, the Moonweaver doesn't have an official holy day. Instead she is celebrated once every ten years on the night when the full moon, presumably Catha,[24] is the largest in the sky. Elven astronomers are able to track the moon's phases and observe how it grows larger and smaller in the sky with great accuracy. Haughty elves use this night as an excuse to act mischievous, and younger elves pull pranks on their peers with costumes and illusions.[18] In Bysaes Tyl, some elves hold a secret festival in the Pearlbow Wilderness, as worship of Sehanine is banned in the Dwendalian Empire.[19]

Sky Queen’s Favor
Every four years
Giants from across Tal’Dorei gather in Skyanchor Citadel to compete in tests of strength, agility, and endurance during the quadrennial tournament of prowess. The competition welcomes not only giants but goliaths and even some champions of the smaller races.[25]