Bells Hells[4] is an adventuring party that met and joined together while they were all in Jrusar, Marquet in the summer of 843 PD. They are the protagonists of the Third Campaign of Critical Role.

Three small groups came together near the Spire by Fire Inn in Jrusar when a magical disturbance nearby created several animated objects that threatened to attack innocents in the street. One group, Ashton Greymoore and Fresh Cut Grass, had been at the Inn looking for employment; another pair, Imogen Temult and Laudna, had been shopping after inquiring about how to enroll in a prestigious university in the city; and Dorian Storm, Fearne Calloway, and Orym had been sent to Jrusar on a search mission to locate Oshad Breshio. As they spontaneously coordinated to fight the animated objects, Bertrand Bell arrived and was impressed by the seven individuals' effectiveness as a combined team. Bertrand, who knew Lord Ariks Eshteross was looking for talent, promised to make introductions to high-placed people in the city to help the seven with their various goals, and took them to see Eshteross.[5]

At the request of Lord Eshteross, the party investigated the Prudaj Textiles warehouse, looking to stop ongoing thefts. They found a ledger with evidence that the warehouse manager, Danas, was covering up the loss in warehouse stock. Tracking Danas, the party arrived at the Weary Way Tavern just in time to witness her murder at the hands of her partner in crime, a pale dwarf known as Dugger, who overpowered the group with the aid of a number of shade creepers and made his escape. That evening, while taking a late-night stroll, Bertrand Bell was cornered by that same individual, who swiftly took his life. Seeing Bertrand in a recurrent nightmare of hers, Imogen raised the alarm, and Bertrand's body was found soon after. Going back to the tavern room where they fought the dwarf, the party found a hidden hole under the desk that seemed to be as deep as the spire itself. With information from the Hubatt Corsairs, the group found out where Dugger lived. The dwarf exhibited strange abilities, like a viscous physical form, but the party was able to kill him and avenge the death of Bertrand.

As they looked for clues related to Oshad Breshio, the group also investigated disappearances at the Dreamscape Theater and disposed of the spitting mimic that was responsible. After the fight, they were approached by Chetney Pock O'Pea, who hired them to find his missing guide, Gurge Kisgregg, and offered to help them until they could find him. Before they could begin their search, they were accosted by Dorian's brother, Cyrus Wyvernwind, who let them know that he was working with the Hubatt Corsairs and that he had a big bounty on his head. The group began looking for Gurge, and found out that he turned into a terrifying beast and was taken by the bounty hunter Artana Voe to her client, Vali Dertrana, the business commissioner of the Mirror Towers. After quickly scouting the Moon Tower, Ashton split off to pay a short visit to his employer, Jiana Hexum. It was revealed that she was the one who put a bounty on Cyrus' head, and that Ashton owed her a debt. In the middle of the night, the party infiltrated Vali's office. At the end of a secret passageway, they found Ira Wendagoth, an eerie-lookie fey also known as the Nightmare King, who was keeping Gurge in a cage. The party released Gurge and battled Ira and the furniture that he made come to life, with Chetney revealing his true identity as a werewolf. Ira left the scene after activating a powerful magical reactor, and the group ran away just before the tower was blown up.

The next day, the group visited Lord Eshteross to tell him about Ira, and were able to determine that he was working for Armand Treshi, who would be attending a ball later that week. In the meantime, the group visited House Lumas to meet Oshad Breshio, the man Keyleth had tasked Orym to speak to and learn about his attack, before heading to the Starpoint Conservatory, where Imogen was finally allowed in to research her powers. She found out that a study had discovered several individuals across Exandria who were prone to the same dream as her seemingly caused by the celestial solstice, including her mother, Liliana. In the following days, Imogen saw two figures holding hands amidst the storm in her dream and thought it might be the Lumas twins, who were the last known people to have read the study.

On the night of the ball, Dorian and Eshteross appeared as guests while the others acted as their respective entourage. During the Dance of the Crossroads, they managed to replace Armand Treshi's prize ring with a traceable, enchanted copy. Because he wore a mask of the Nightmare King, Ashton was challenged to a duel by General Ratanish, leader of Paragon's Call, which he lost. While spying on Armand's date, Lady Emoth Kade, Chetney found out that she was meeting up with Dorian's brother Cyrus. He saw that she could command shade creepers and called the others, who arrived as Emoth killed several guards in a form similar to Dugger's. Emoth escaped, but the party managed to save a single guard, who asked who they were. Imogen gave him their new name: "Bells Hells". As they returned to the ball, Dorian saw his brother being arrested by the Green Seekers and threw a smoke grenade, managing to sneak him out of the area. After they had all made it home safely, Eshteross offered to smuggle Cyrus to Emon on his skyship, Seeing as he was now a higly wanted fugitive. Dorian decided to leave with his brother, saying goodbye to the rest of the group.

Immediately after the party was first formed, Bertrand Bell began suggesting names, which the rest of the group ignored. However, after his death (and after hearing of Ashton's former team, the Nobodies) the party actively began looking for a name. They asked several people what word first popped into their mind when looking at the group.

During the masquerade ball held by the Chandei Quorum, Imogen first used the name Bells Hells to refer to the party when Dunot, a guard that they saved from Emoth Kade and her shade creepers, asked what to call them.[6] Later that night when Dorian was taking his leave with his brother Cyrus, he asked the others if they liked that name, to which they toasted.[7]

Relationships within the group

Five horses were rented in the Rapid Path Stables of Jrusar for 150 gold with an additional 150 gold deposit to be refunded if the horses were returned,[19] which they were when the heist in Heartmoor Hamlet was complete.[20] Each of them was given a name:[21] 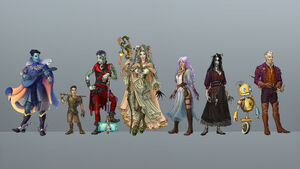 Official character line up of the party, by Hannah Friederichs.[art 6] 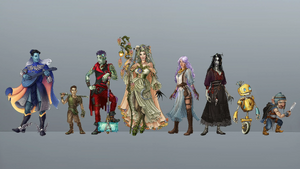 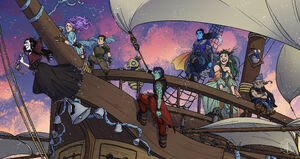 Official art of of the characters of Campaign Three, by Kendra Wells. Released as a wallpaper for the 2021 festive season..[art 8] 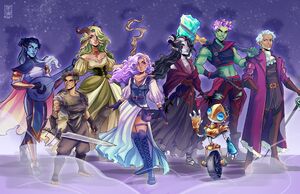 Fan art of the campaign three party, by Toby Sharp.[art 9] 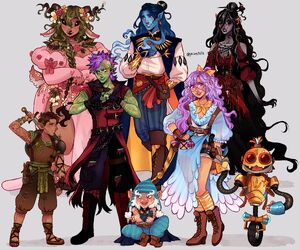 Fan art of the campaign three party, by pixelllls.[art 10]