Fan art of The Gentleman, by OrcBarbies.[art 1]

Crime Boss for The Myriad[1]

The Gentleman (real name Babenon Dosal[3]) is a Water Genasi[1] crime boss in Zadash, working out of the Evening Nip tavern. As an NPC, The Gentleman/Babenon is played by Matthew Mercer.

The Gentleman has light teal skin, a dark goatee, and shoulder length jet-black hair, that forms a widow's peak. He wore a deep-blue coat, and leather gloves.[4] His skin seemed to be perpetually moist, having a layer of condensation on it.[5]

The Gentleman oozes confidence and despite inciting fear in many who hear his name he comes off as cheerful and approachable. He has been shown to treat the Mighty Nein with respect and generosity and has proved on several occasions that he sticks to his word. The Gentleman runs his operations in Zadash with a certain amount of meticulousness and places a great deal of importance on luck. During most waking hours, The Gentleman is engaging in deals and revelry in equal measure. Despite his calm, flirtatious and charismatic exterior he is still the head of an extremely dangerous criminal syndicate and quite dangerous. If he believes a group is lying to him, he is more than willing to attack them and sell them into slavery. He is known to be deadly with a rapier, and his reputation alone is enough to keep most onlookers in line.[1]

The Gentleman claimed, when his credentials were questioned, that he had lived and worked in the underbelly of Zadash since 821 P.D. and had never been caught.[6] He later revealed to Jester that he was in fact her father, Babenon Dosal. He had been a merchant sailor out of Feolinn[7] before meeting her mother Marion, but felt himself unworthy of her and left to find fortune. His ship was attacked at sea, and this led to an extended period of time in Darktow. He became a skilled criminal, and when he felt his success brought him unwanted attention from the Plank King, he left to begin his criminal empire in Zadash. The Gentleman has held a position of influence in the shadows of Zadash for nearly two decades, using his charm and connections throughout the city to carve a sizeable niche for himself in the Underworks beneath the city. He became respected as a suave crime lord with dozens of reliable cutthroats and thieves at his beck and call.[8] 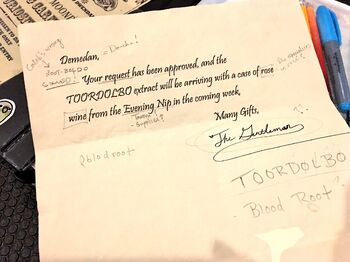 Beauregard stole three packages to Demedan Baumbauch, finding a coded letter about a future shipment from the Gentleman.

When questioned by Beauregard and Nott, Thed revealed that the way to meet The Gentleman was to offer "many gifts" as payment to Clive Bens at the Evening Nip.

Being cautious and fearing being caught, The Gentleman requested that all those who entered his domain leave him with a vial of their blood, which Cree kept in a small leather satchel. This blood was to be a symbol of trust between parties and insurance against anyone who dared betray his friendship, as Cree could use this blood to track down such persons.[9]

Wanting to test the group and see if destiny and luck was with his new investment, he proceeded to play a Marquesian card game called the Gambit of Ord against Fjord.[10] The stakes of the game were that should Fjord lose he would have been bound to The Gentleman's service, if Fjord should win business would continue as usual. Starting with a 50gp buy-in, the pot rose to 600gp which Fjord won.[11]

Once The Gentleman had insured himself against the group and tested out their luck, he revealed that his organization was a company that specialized in the task and trade that was deemed not the most legal, and that were to some extent restricted by the empire. His group's skills were focused on being deceitful, working fast, and working in the shadows.[12]

The Gentleman also revealed that word had reached him of the party's activities at the Sutan residence and at the home of the High-Richter. Specifically, he let the party know that that Lord Sutan was in chains, and that the crownsguard were looking to pin the High-Richter's murder on someone matching Mollymauk's and Beauregard's descriptions, who they saw near the home at the time that she was murdered.[13]

Establishing a working friendship, The Gentleman suggested that he had many gifts that he could offer the party including aid in making sure that Lord Sutan stayed locked up, and that the crownsguard investigation would look the other way and drop their investigation of the suspected murderers[14], as well as help to escort Horris safely and secretly out of the city.[15]

In return The Gentleman asked that the party perform a task for him. He wished for the party travel around a mile along the underground river pass that his group uses to ship things out to the Ounterloch and Berleben. He wanted the Mighty Nein to go to the area and continue the investigation of an abandoned aged research facility that a previous group had discovered and explored before being beset by Will-o'-wisps. They ran away in fear and caved in a portion of the area, noting the location to be filled with a purple light and ancient golden-laden spoils. While there the Mighty Nein were to clear out any dangers, and return with their findings, at which point The Gentleman would graciously let the party keep a portion of the spoils.[16]

Questioning his credentials and ability to clear the group's name of wrongdoing, Nott proposed The Gentleman take a test of her making. Preparing three vials of alcohol, she mixed in some acid into one of them and tasked The Gentleman to carefully identify and drink one of the safe vials. Identifying all of the vials correctly, he confidently took and drank the acid vial. Impressed by his display, Nott drank the alcohol and kept the vials she received from Cree.[17]

The Gentleman, interrupted from some morning revelry, emerged to greet the Mighty Nein wearing a dark purple silk robe tied around the waist. He was delighted to see that the party was reliable though a little sad that they had returned the next morning, instead of immediately after they cleared out the Abandoned Research Facility. After describing the location, traps, and the monsters they had encountered, the subject moved on to the arrangement of the loot that they were to hand over. Though skeptical of Nott's initial lie about what they had found, he eventually accepted Beau's lie that Siff Duthar's research journal, the ancient pots, and the various bits of jewelry were the items of value from the expedition. Following the agreement to split some of the spoils, The Gentleman let the group keep the rings that they had found, and dispatched two members of his troupe to clear Molly, Beau, and Dolan's name in the matter of Dayana Prucine's death. Concluding their business, he returned to his chambers to continue his breakfast and his "breakfast."[18]

When the Mighty Nein arrived in The Evening Nip to discuss the Gentleman's offer of a job, he presented them with two tasks. If they could handle both and with timely mind, there might be a bonus.

After some deliberation, they accepted both tasks. The Gentleman provided the group two healing potions, a potion to cure diseases, and advances for the two jobs, sending them on the road north to Berleben.

The Mighty Nein brought Ophelia Mardoon back to Zadash, finishing both jobs they had accepted from The Gentleman. When The Gentleman saw Ophelia, he kissed her. She kissed him back, but also bit his lip, drawing a little bit of blood. When he realized Molly was missing, The Gentleman told the group he was sorry for their loss. He gave them an additional fifty platinum on top of their payment. The Gentleman offered Caduceus the same deal as the rest of the Mighty Nein: they will kill him or take some of his blood. Caduceus agreed on the condition The Gentleman promised not to cast anything strange on the blood.

Before leaving the Evening Nip, Jester and Nott tried a little detective work. Nott wandered over to The Gentleman and tried to subtly drop the names Avantika and "the captain". Nott's name drop was very obvious, but The Gentleman did not pay much attention to Nott. Jester tried to read The Gentleman's reaction, but he was more interested in talking to Ophelia Mardoon.[19]

Jester cast Sending on The Gentleman, saying, "Hi, dad. It's Jester. I know it's been a while since we were in Zadash, but just thinking about you. I miss you. You miss me?" After a pause, he responded, "You're being ridiculous. I'm not your father. But I'm glad you're all right, wherever you are. Come back some time. I've got more work, more money to be made."[21]

Jester confronted The Gentleman about being her father. He still denied it, but Caduceus later talked to him about family, ending the conversation by saying "Family is so complicated and I was cruel on occasion to my siblings and not as honest to my parents as I wish I'd been, but it is a unique, exquisite complication, family... Well I'm just saying, you should tell her (referring to Jester). I think it would do you good... Both of you."

That night, during Jester's watch in The Gentleman's guest room, she noticed someone peeking through the door and followed the Gentleman to the bar. He started the conversation with, "How is she? Marion." This admission that he was indeed Jester's biological father was immediately followed by him stating that he does not consider himself her true father due to having not been there to raise her. He told Jester about his love of Marion, and how, since he was penniless, he felt unworthy of her and set off to find a fortune. During his journey, he was captured and taken to Darktow Isle. He eventually worked his way up in the hierarchy of The Revelry with his silver tongue, becoming wealthy, but at the same time being drawn too deeply into their criminal dealings to be able to go back to Marion. To keep her safe, he never went back. He had tried to forget about her for a long time through alcohol, drugs, men, and women, until Jester showed up in his bar, reminding him of it all.

Sorah is the main bodyguard of The Gentleman and one of his many lovers.

The Gentleman and Ophelia appear to be former lovers, as he drew Ophelia in for a passionate kiss when the Mighty Nein brought her to the Evening Nip. They are also long-term business contacts.

Jester suspects that the Gentleman may be her father since her mother had described him as blue and because water Genasi are uncommon on Wildemount. When Jester confronts the Gentleman with her suspicion via sending, he denies knowing her mother.

When Jester finally speaks to him in person, the Gentleman reveals that he is in fact her father, at least by blood, as he does not consider himself her father because he was absent her entire childhood. He says he did not know of Jester until she walked into his lair. [22]

Babenon Dosal was once engaged to Marion Lavorre. As a simple merchant sailor, he felt unworthy of her affections and set out to seek his fortune. After his capture and time in Darktow, he felt more unworthy of her than ever. He does not want to drag Marion or Jester into his life of crime.[23]

Unless otherwise noted, the following abilities are assumed from the standard Dungeons & Dragons materials:

Retrieved from "https://criticalrole.fandom.com/wiki/Babenon_Dosal?oldid=110671"
Community content is available under CC-BY-SA unless otherwise noted.