watch 01:47
Wiki Targeted (Entertainment)
Do you like this video?
Play Sound

Dwendalian Empire
Alfield is a small, rural farming town in the Marrow Valley in the Western Wynandir region of Wildemount, and it primarily shuts down post-sunset.[2] It serves as a trade stop on the Amber Road between Trostenwald and Zadash. The town falls under the rule of the Dwendalian Empire and is overseen by Starosta Kosh.[3]

On the night of 20 Sydenstar 835 PD, Alfield suffered significant loss of life and arson of several buildings during a gnoll attack.[4]

Slightly smaller than Trostenwald, Alfield is an open farm village with occasional waist- to shoulder-height partitions.[5] With open fields to the south, the town is flanked by clusters of trees on the eastern and northeastern sides.[6] Two main streets bisect the village in its central square, one spanning from the northwest to the southeast, and the other from west to east.[7]

The Broad Barn located on the western edge of town, the store sells farming and basic supplies. The name comes from the barn that it once was.[16] The proprietor was an extremely old gentleman with a giant, gnarled tuft of a chin beard that merged with a lion's mane–like halo of white hair with a thin, long, crooked nose.[17]

The Candleglow Inn is located in the central square. It was once built by Reedus Candleglow, who left the inn to his grandson, Thadeus Candleglow.[32] Thadeus was proud, that his inn once had, though perhaps not the greatest quantity, the highest quality of salted, dried, fresh, and butchered meats in town.[33]

The Feed and Mead Tavern is not the most comfortable establishment. The owner of the tavern, Crute, is an ornery, salty-looking, old dwarf with tousled, white-grey hair and a single tuft of a beard that dangled down toward his belly button before ending in a ring of gold. Poor of sight, he tended to look above or at a person's shoulder when talking to them.[34] The tavern has two[35] or three[36] rooms for rent upstairs, one of them had four twin-sized beds tightly jammed in the room.

Menu For the cost of three silver pieces, Feed and Mead offered a top-shelf drink in a deep green, corked, glass bottle. Poured into a shot glass, the liquid was a deep sea-teal green. When drunk, it had a smoky, oak barrel flavor on the tongue, though this was quickly followed by an herbal and charcoal medicinal burning taste.[37]

The Salt Trench Jail is the furthest building towards the forest. It is small dark grey stone and shack. With a dark, weathered wood frame set around it weathered. This shack is where the prisoners of Alfield are kept.[38][39]

The Broad Barn was once a barn, though poor crops led to the farmers giving up farming and selling the tools they didn't need. As it happened, the farmers saw that they made more money that year from their tool sale than from the crops, so they started importing more tools and converted the barn into a general store, which has been serving this part of town since 805 P.D.[40] Due to the store's success, the town eventually grew in to fill the gap between it and the town proper.[41]

When a Crownsguard patrol reported seeing a small hunting party of gnolls to the south, Watchmaster Bryce Feelid sent out a troupe of more than half of the town's guards to find and slay them. This decision left the town vulnerable when a large force of gnolls struck two hours later.

When the party that would soon be called the Mighty Nein approached Alfield at night about half a mile from the south, they noticed several flashes of orange light and the curl of flames spreading from rooftop to rooftop. They saw a handful of buildings on the eastern side of the village that had already been consumed by flame. Quickly making their way closer to within a few hundred feet of the western side of the village, they saw a few hundred people running out of town into the fields. Among them were a family of five halflings.

Reaching the Alfield's central square, the party engaged the gnolls in battle. A brief battle ensued but ended when two of the party members were knocked unconscious, leading to the gnolls escaping in an east-northeasterly direction three carts full of various loot, corpses of villagers they had slain, captives, and almost all of the village's meat supply. As villagers begin to emerge from their homes, the party helped put out fires and collected ears from the dead gnolls.

In appreciation for their help in fighting the gnolls, the Crownsguard lodged the Mighty Nein in the Feed and Mead Tavern—and they would have continued paying for their stay as long as they continued helping deal with the aftermath of the gnoll attack. The Party was lodged in one of the rooms that had four twin-sized beds tightly jammed in the room. Watchmaster Bryce Feelid paid the party for the gnoll ears they collected and pointed them toward the Feed and Mead Tavern for the night, and the party eventually all went to sleep.

The party woke up after a somewhat less than comfortable night's sleep in their single room at the Feed and Mead Tavern in, before going out into the town and helping sift through the rubble.

At the Broad Barn, the party found Watchmaster Bryce involved in an argument with one Starosta Kosh (whom Jester happened to recognize as a former client of her mother's). As they approached, Kosh stormed out, and Bryce greeted them with an offer of further work: 30 gold per gnoll ear, 25 for a returned living villager, and 10 gold for a dead citizen's body. The party purchased some supplies at the Broad Barn, then convinced a crownsguard to loan them a horse, under the effects of Mollymauk Tealeaf's Charm Person spell, to use during their mercenary mission.[42]

After coming back from the Rill's Mouth Mines the party ended up renting additional rooms for the night. The next day, before leaving town, the party collected payment for their gnoll ears from Bryce. When asked again for their party name, they settle on The Mighty Nein.[43]

Property Damage The Candleglow Inn was ransacked and burned down. Due to the cost, estimated in thousands of gold pieces, to rebuild it, Thadeus expected to leave Alfield to start his life over someplace else.[44]

The Ruddy Top Butcher building was still standing after the gnoll raid, but it had taken quite a bit of fire damage, resulting in its roof collapsing down into the floor below. The gnolls seemed to specifically target this building and took its entire stock of meat during the attack.[45]

The On the Wind Stables sustained fire damage.

About two-and-a-half months after the gnoll attack, the party returned to Alfield on its way south to the Wuyun Gates. They discovered, much to their surprise and joy, that Thadeus was well on his way to rebuilding with the help of his neighbors. They drank and ate with Bryce in the Feed and Mead Tavern. While in the tavern they were recognized by the other patrons as the saviors of Alfield, and were given free drinks. After they discussed the war and their journey to the Menagerie Coast, they decided to stay the night in the tavern. 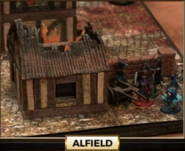 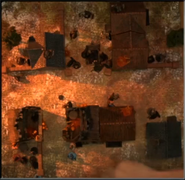 Retrieved from "https://criticalrole.fandom.com/wiki/Alfield?oldid=120513"
Community content is available under CC-BY-SA unless otherwise noted.